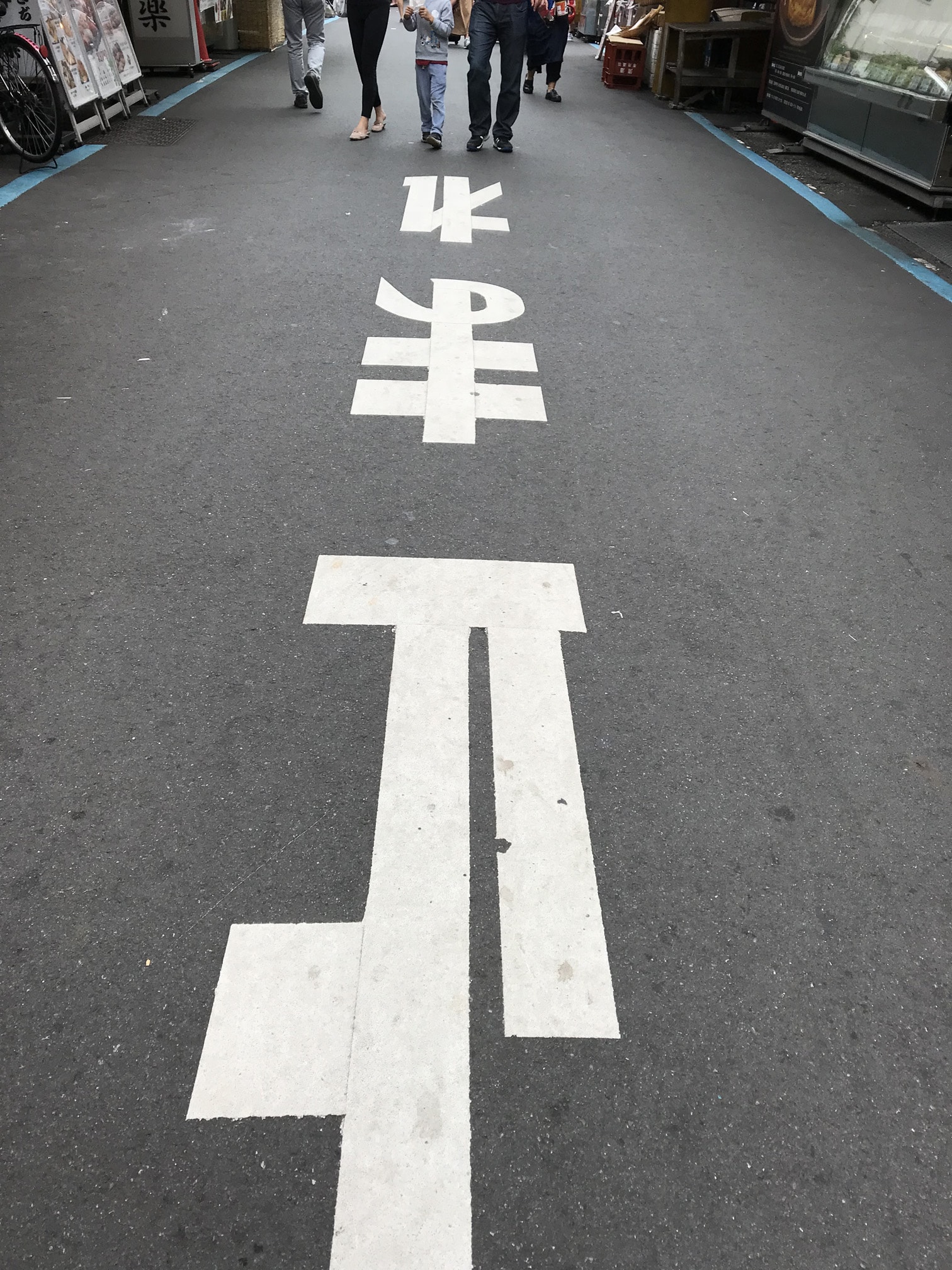 To say this was the trip I had waited for my entire life would be an understatement, but I didn’t know that before I went.

In this first of a three part series on the fabulous sights of Japan, I have many high points of Tokyo and area to share and beautiful images of this land of richly textured contrasts and graphic beauty. If you plan to visit Japan, this should whet your appetite. Stay to the end where I’ve shared info on the sights you won’t want to miss.

The vision of Japan started for me as a child when I sat wide-eyed listening to stories of my grandmother’s childhood in Tokyo. You would never guess that English was her third language – the stories poured out of her so fluidly as she reminisced. My grandmother, you see, was born in Tokyo in 1900, along with the next five of her seven siblings. Her parents had emigrated from Canada, travelling by ship to Japan in the late 1890s. In Tokyo they raised their family in a settlement for foreign diplomats. The stories she would tell of the mischief her brothers would get into with her (she was the oldest) in charge would keep us riveted. The children all learned German in the home, Japanese while playing with other children in the street, and in school they learned English. We all thought it was quite funny that our great uncle was named Cuyler “Yasushi” Hauch! Yasushi was the name of a family friend they met there. I tried to name my son after him, but that was a no-go for my husband!

Below, is Grandma Krug (nee Hauch) as a child. I finally had her kimono restored by an expert at the Textile Museum in Toronto – moths had damaged it over the years. Photos of that another time, when I finally have it mounted on the wall. 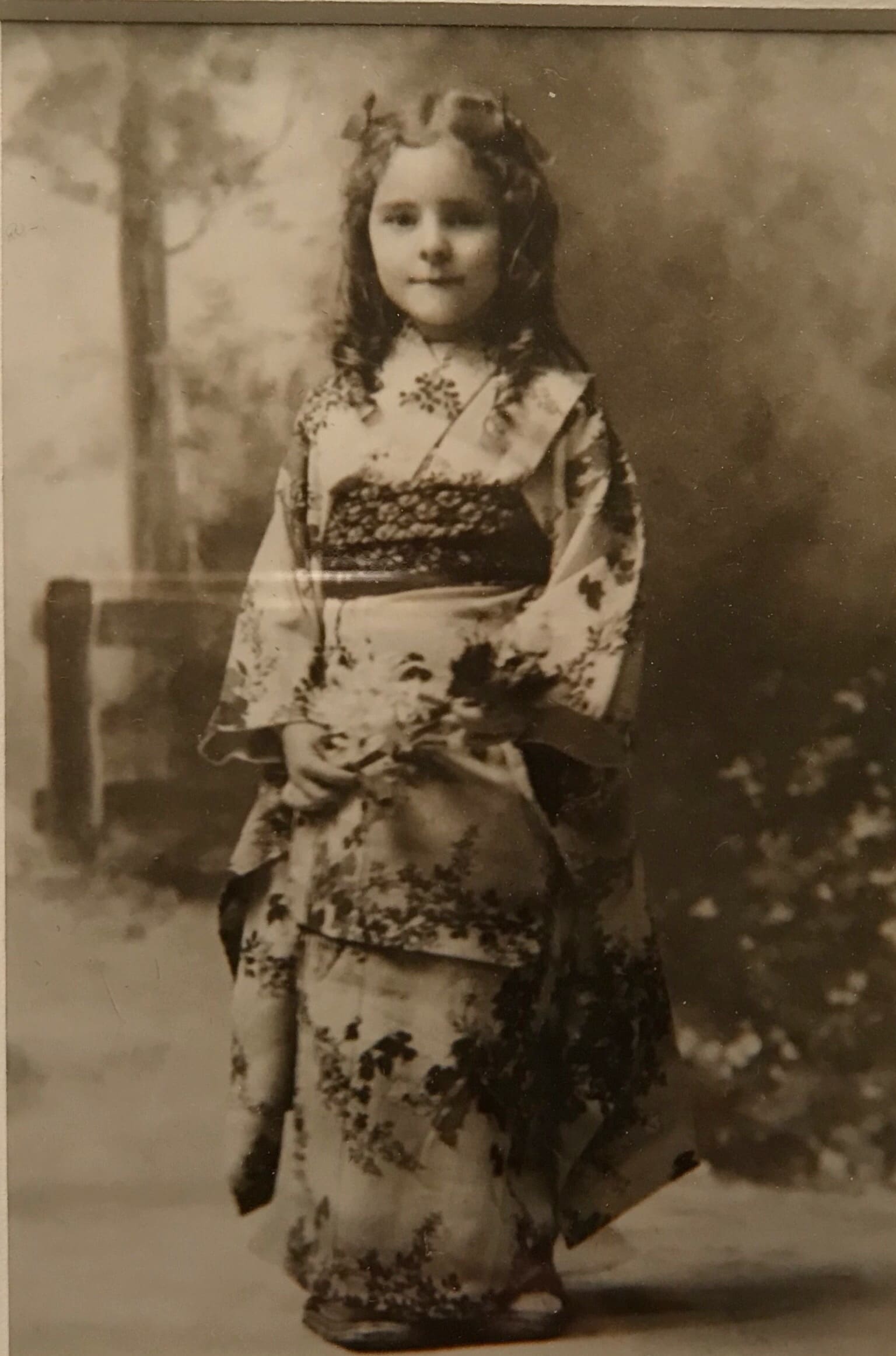 Travelling with my sister (who is in architecture) certainly added focus to the trip. I learned about shear bracing on the outside of buildings (to stabilize against lateral movement, used in earthquake zones) among other things. We had fun recalling stories of our grandmother, then a youth herself, being instructed to put the baby in the fireplace (unlit, of course) or under a door frame when an earthquake tremor was felt. Places like door frames add structural reinforcement and can offer additional protection during an earthquake.

Below, this photo of my grandmother with a couple of her childhood friends always amused me. Grandma on the right.

This is meant to be a travel post, not a personal history, so back to Japan and all its beauty.

We started our trip in Tokyo, an immense city with many sights to see. With only a couple days there, we only got to see a small sample through the foggy lens of jetlag.

The first day’s outing took us past the Imperial Palace (formerly known as Edo castle), the residence of the Emperor of Japan. There is a moat around it and we didn’t get anywhere near close enough to get a photo. This one borrowed from the internet shows its beauty.

Before that though, our first stop was the Tsukiji Outer Market, which is Japan’s No. 1 place for seafood, It has over 400 shops, including numerous fresh fish retailers, grocers, and restaurants. There was an immense section of ready to eat delicacies. Some enticing, others, well – not so much!

Beyond food (which of course there was a lot) there were shops with cookware, ceramics, etc. I have always wanted a cast iron tea pot like grandma had. Unfortunately, purchasing one would most certainly have put my luggage overweight with just this one purchase. This was a pretty one though (pictured centre).

From there we visited the requisite tourist attraction, Tokyo Skytree Tower. At the top of the tower you could see the immensity of the city spreading as far as the eye can see in all directions. In this photo, you can see the city fading into the horizon. On a clear day you can see Mt. Fuji, or Fujiyama as grandma taught me to call it. This was definitely not one of those days.

From there we visited Senso-ji, Tokyo’s oldest temple, followed by our first shrine. There were many temples and shrines to see throughout the trip! It is easy to get all ‘templed out’ and/or ‘shrined out’, so do your research and pick those of most interest to you.

In Japan, the five–story pagoda is common, with each story representing one of the five elements: earth, water, fire, wind, and void which refers to the sky or heaven.

Later, we shopped the nearby Nakamise Shopping Street. Our first sighting of kimonos below, just a few girls having lunch in a sushi restaurant. The beautiful kimono prints show such vibrant colours and mixed patterns, in ways that contrast so beautifully!

Rickshaws to the rescue after hours on our feet. This fellow delivers customer service with a smile. Jetlag had taken the glow from my face hours earlier but I was still dazzled at everything we saw.

I always have energy for more shopping! I was hoping to purchase a pair of traditional Japanese geta (shoes) before the trip was over. These were too pricey for me but they had some beauties!

In these early days on our trip, and throughout, I was struck by how much courage it must have taken for my great grandparents to leave Canada and travel to a foreign land to set up home and raise a family. Before air travel and the automobile, they must have travelled by ship, enduring many weeks at sea, and then by train into the mountains. I recall grandma telling us she travelled back to Canada by ship the year before the Titanic sailed.

On the second day, we participated in a traditional tea ceremony. We were served matcha green tea in Kamakura at Jomyjo Temple. The surrounding rock gardens were exquisite. Our hostess demonstrates the ritual of preparing the matcha tea while our tour guide translated and explained the symbolism for us.

Texture and contrasting natural elements are the backdrop of vibrant flowers and greens everywhere. Isn’t this construction lovely? Attention to detail and artistry is such a highly regarded value in Japan.

The rock gardens surrounding the tea house were beautiful.

Bonsai trees, so elegant, grace the grounds of the nearby Jomyoji Temple.

I was struck by these young children in kimonos. At the age of three, five, and seven, Japanese girls dress in kimonos and have a special celebrations. Boys celebrate at ages three and five.

A shot from Enoshima Island, a small island off the Shōnan coast of Japan.

One must when in Tokyo is to try a sushi conveyor belt experience. Just as it sounds, plates of sushi are circulated on a conveyor belt on the countertop. If you see something you like, just help yourself to a plate. They tally up the number of plates you selected when you are done to determine your bill.

…more to come! Our post on the inner mountainous region and its traditional villages, and on Kyoto and its riches of handicrafts will follow in the upcoming months. I have so many gorgeous photos to whittle down to the very best for you!

10 responses to “Postcards from Japan – Tokyo”