A Legacy in Quality Furniture Manufacturing 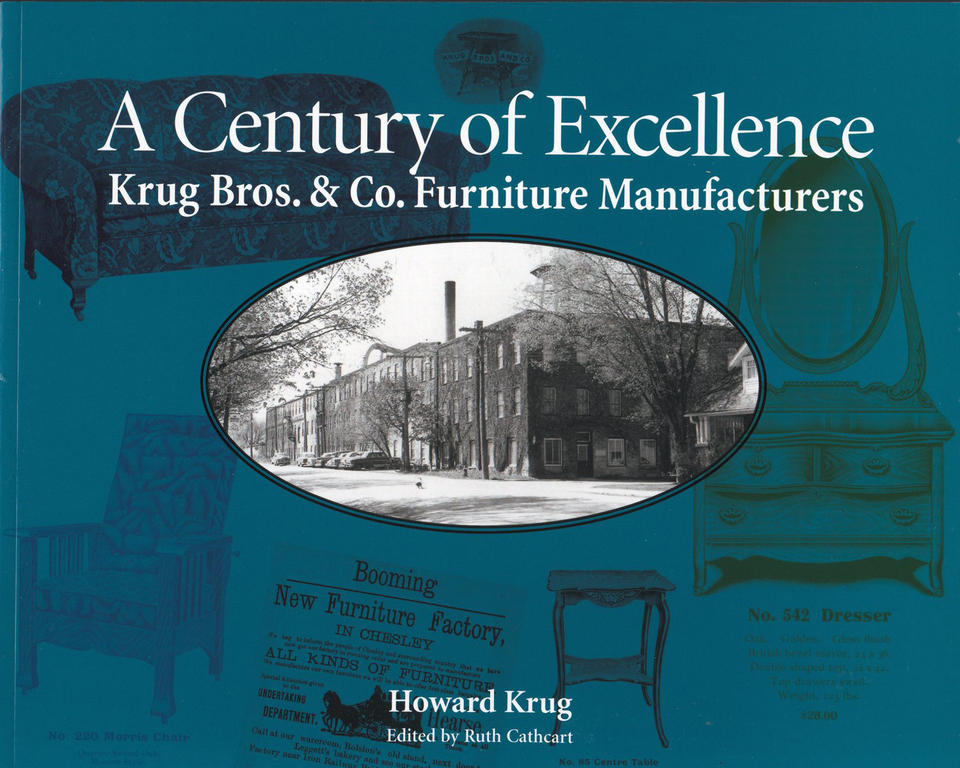 “I’m here for W.P’s mail” I would say when I would dash into the Post Office on an errands run. “W.P.” was what everyone knew him by. The “Krug” was just assumed because if you lived in the town where their factory was, either your name was Krug or you worked for the Krugs.

It was William Peter to be exact, William Peter Krug. It helped that he (W.P.) was also the mayor of the town for eight consecutive terms. A full name was never needed. Together with two of his cousins, W.P. ran Krug Brothers Company Ltd.

Where does one begin a post about a story that began almost 140 years ago? At the beginning I suppose. I’ll be brief!

Quality furniture starts with a commitment at the top

Firstly, if you are going to indulge me in reading about my family legacy, I owe a bit of an explanation about why I feel so compelled to tell this story. For one thing, my heritage is one that I am very proud of, and there are two prominent branches on my mother’s side. In this instance I write about our Krug heritage. I wrote a bit about my grandmother’s childhood growing up in Japan previously.

But the more pressing reason I feel compelled to write this is that I find myself in an industry where I see the quality of furniture available to homeowners declining rapidly. Not only is it declining, but the average homeowner is completely unaware! Those who know me well, know I can get all bossy-pants about quality when it comes to furniture. A pretty sofa is just a pretty sofa, after all, to the uninformed consumer. The typical homeowner is completely unaware of what is inside a piece of furniture (cardboard and plastic come to mind), nor where it was manufactured and according to what specifications and standards, not to mention the working conditions.

I wrote a post a while back offering tips when buying a sofa, where I highlighted a bit about the inner construction of a well-made sofa, and what to look for. Sadly, most people look at a price tag and let that decide. When I work through a project budget with a homeowner, the one question we linger on is “when do you want to invest in replacing this furniture?” In other words, how long do you expect it to last. Good furniture should last a lifetime – or two, or three, in the case of tables and case-goods. Sadly, many many pieces wind up in land-fill after a few short years.

My story is one of a legacy of furniture-making that set the standards high in North America for construction as well as responsible forestry practices, and environmental consciousness far ahead of its time.

Perhaps the main reason I have never written this story (yet) is because there is so much of it, and so many branches. 100 years and 600 employees is a pretty long time, and a story with many characters, after all! I could write about the grand homes owned by the Krug family members, or about the politics of the town, or perhaps about their private hunting/fishing club at Stokes Bay, and the cottages at Southampton…but let’s talk furniture production. For now.

So this is where my story begins

For more than a century, between 1886 and 1987, the Krug Bros. & Co. furniture manufacturing business was the lifeblood of the southwestern Ontario town where the business was located. At it’s peak, the Krug family employed 600 people between the factory, the forests where the timber was farmed, and the sawmills they ran. My mother, is Joan Krug, the daughter of Secretary Treasurer and Chief Operations Manager, W.P. Krug. I come in much later in the story as a small child hanging out at the furniture shows and trying to stay out of trouble while my grandfather negotiated deals with furniture retailers across the country.

An essential service to a newly colonizing country

Described as a story of determination and grit, the business was started by my great grandfather in the late 1800’s, together with his brothers who all learned various aspect of the trade: cabinetmaking, upholstery, etc., working in various firms across southern Ontario as well as south of the border in the U.S. They established their business in Chesley Ontario in 1886, locating next to the Saugeen River where they could draw power with a waterwheel. Canada was not yet formed as a country, and electricity was not yet available. Coal oil lanterns provided light, the vast tree farms were logged by horse and flatbed, and timber was prepared in a heating plant where they ran a dry kiln. Final product was delivered to the newly completed Grand Trunk railroad by horse for shipment to various parts of Canada, necessitating several teams of horses and stables to be maintained. In the first decade and half, the company experienced a “dizzying rate of growth” as an essential service to a newly colonizing country.

In the beginning, they manufactured coffins, church pulpits and pews. From there they began to develop a line of domestic furniture for the home.

Considered pioneers and leaders in reforestation in Bruce and Grey counties, the Krugs owned a vast amount of forest land that they farmed for the business’s use in lumber for furniture production. Responsible harvesting, and replanting ensured the longevity of the forests. Upon the death of the last Krug partner, the largest section, the Kinghurst tract – 600 acres of old growth forest was donated to the Federation for Ontario Naturalists reserves to be protected in perpetuity. A permanent home was preserved for rare old forests and bird species in the natural habitat the forests provided. Land access to large sections of hiking trails on the Bruce trail were negotiated by the Krugs to provide a permanent hiking haven enjoyed by many locals and tourists alike.

Fires took down acres, as did disease. I recall the dinner table conversations in the 1970s when Dutch Elm disease was destroying a lot of the elm trees on the lot. Prior to this, elm was used a lot in furniture production, along with black walnut, oak, and later mahogany and maple.

The sugarshack! At the Krug forests they also had a sugar mill where maple syrup was produced. I remember painfully the day my sister got to visit the sugar shack and sample their product but I had to take a nap. I was too little to go.

The lines evolved over the years in response to changing styles. In my parents home, we dined at their Duncan Phyfe dinner table with lyre-back chairs, all made in cherry stained mahogany. The bedrooms were outfitted with popular furniture of the day. We now call it mid-century, but then it was just furniture!

My grandparents had a bedroom suite very much like this page from a very old Krug catalogue from the early 1900’s.

My parents had this classic Duncan Phyfe set and we dined at it every night.

Here are just a few of the pieces sold online in auction, and estate sales (below). Pieces can be found around the globe. The proliferation of this furniture still available speaks volumes about the quality. All that is needed is an imaginative flourish to update a room furnished with these pieces. For example, I wrote about the time I found one in a client’s home.

Here’s one of my favourite pieces I found in a client’s home. You can see how well it fit into her contemporary living room. Pssst. remember how Alfred Hitchcock always made a cameo appearance in his thriller films? Well if you look closely, that’s my grandmother Krug in the photo on the desk wearing her kimono.

Sadly, the business closed down before I was active in the industry. A changing demand for inexpensive, easily transported furniture led changes in the market. With three elderly men running the business, it was time to close the doors on an era. Equipment was auctioned off to manufacturers across the province, and the building was purchased for the new site where an antique market was planned. Later, all of the archives of catalogues, furniture, and historic tools and equipment, and an extensive collection of photos and financial documents were bestowed on the Bruce County Museum and Cultural Centre in Southampton, along with a considerable endowment where the permanent exhibit can be viewed. To this day, scholarly articles can be found online about their influence on the industry. A Renaissance family of visionaries who made a difference, Industrialization in furniture making. or another that originally ran in the Owen Sound times.

Below is a photo of my mom Joan Krug, and I at the 100th anniversary celebration where a cairn was erected in honour of the service the Krug Bros business and the Krug family provided the town. A parade was held, followed by a fair in the park where the cairn now stands.

Today’s lifestyles and needs are very different, but making room to know what you are buying seems an obvious choice. Mindful consuming is a practice of making informed choice about purchasing – informed about the ethics and practices of whom you are buying from. I, like anyone else have been known to make quick impulsive purchases and to be drawn to the next pretty shiny thing, but I think the time has come to interrupt that thinking.

When selecting furniture, I ask you to consider a few things:

This post is about what I can tell you about my family’s business. Times are different now. We live in a different economy and a different culture than when my great-grandfather emigrated to Canada and started their business but we can learn from looking back to our elders.

The book journaling the century-run business can be purchased either online (click the link) or in person at the museum.

If you are in the US, you can also see it in the collection at the Bienenstock Furniture Library, a world-class resource library to support the design community and devoted to the advancement of knowledge of furniture and design.

Psssst! We’ve made it easy for you to save this. Click the Pinit button (on the top left corner when you hover) to save it for later.

12 responses to “A Legacy in Quality Furniture Manufacturing”